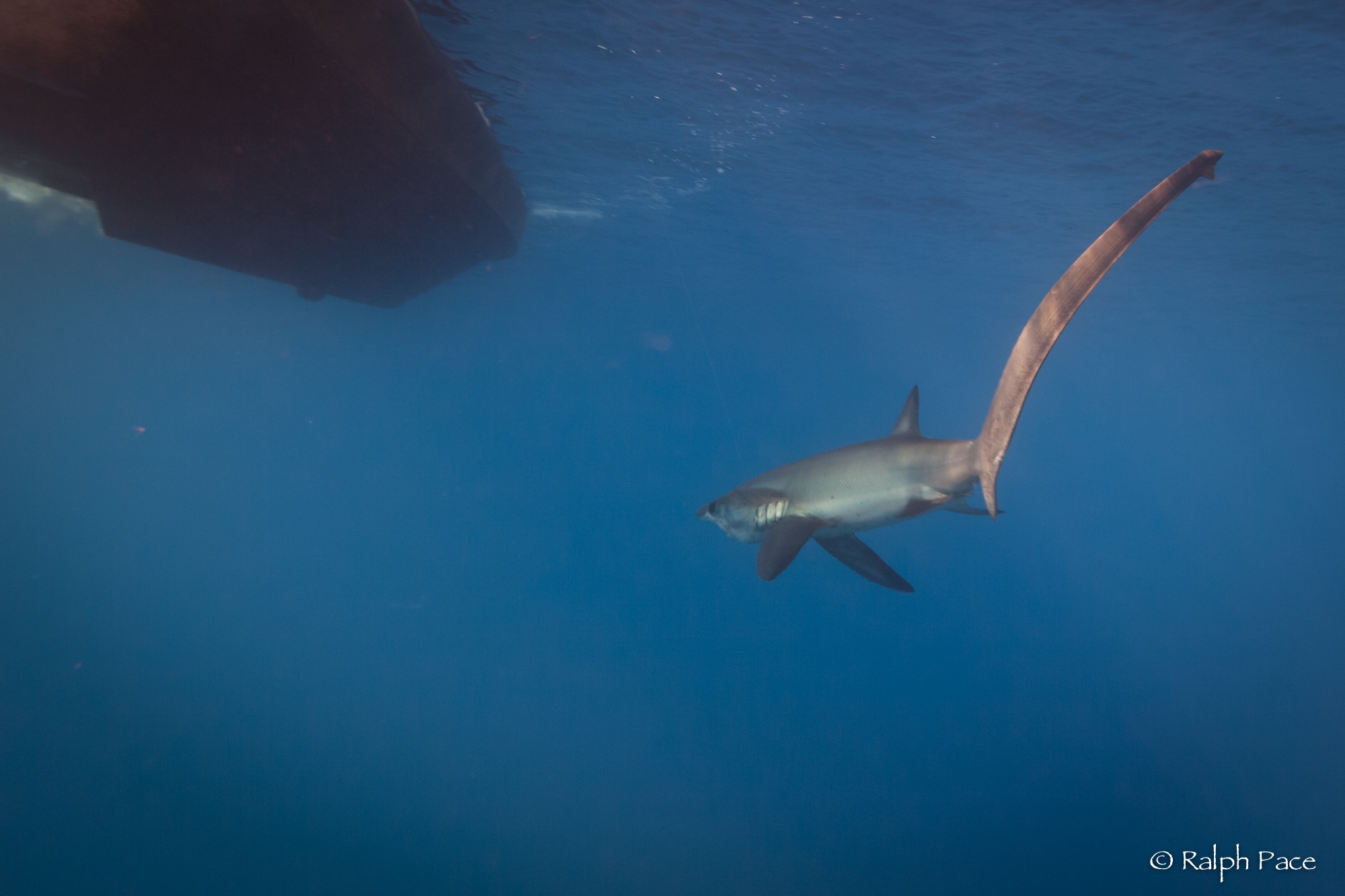 In addition to fishery development and stock structure questions, PIER also focuses on questions related to post release survival. PIER is keenly interested in the disposition of species after they are caught and released.

Catch and release mortality estimates play an important role in management models and also provide anglers with information on their impacts to local stocks.  Over the recent past, the PIER team has performed catch and release survivorship studies on several pelagic species.  Most of the survivorship studies have been through collaborative projects with the National Marine Fisheries Service Bycatch Reduction and Engineering Program (NMFS/NOAA).

Documenting gear impacts and the disposition of released catch continues to be an important topic for resource managers on the West Coast.  Over the recent past PIER has performed post release survival studies on several pelagic species including thresher sharks, Pacific Bluefin tuna, and roosterfish.

See Past Publications for more information

This shark family contains three species that use their long caudal fin for feeding and stunning prey.  Off California, the bigeye and common thresher sharks are typically the most prevalent, but in some years we can also find pelagic threshers here as well.  Below you can find areas in PIER has worked on this group of pelagic sharks and links to additional pages that describe the studies in more detail. 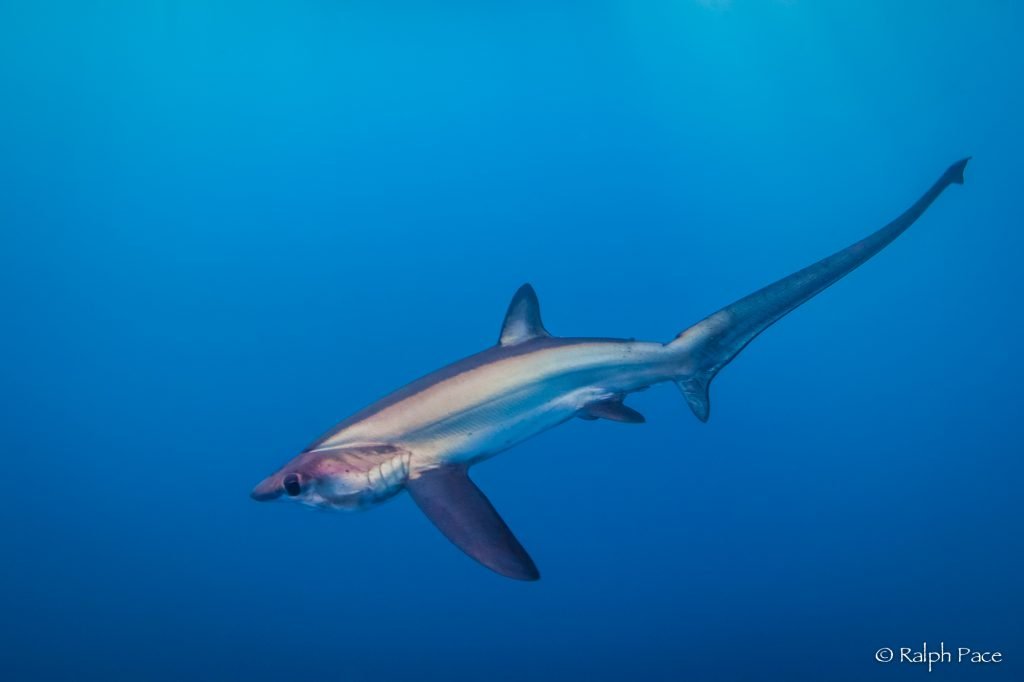 Recently, the PIER team conducted a tagging project assessing the post-release survivorship of bigeye thresher sharks, a frequent incidental catch in the developing deep-set buoy gear fishery.  Because bigeye threshers do not have a comparable market value to swordfish, it is common for them to be released in an attempt to save hold space for more valuable product.  The funding for this work was provided through the NOAA Bycatch Reducion and Engineering Program.

Bigeye thresher sharks caught during gear testing were outfitted with electronic satellite tags that can detect the animal’s movement throughout the water column.  If these movements cease for a prescribed period of time, the shark is presumed deceased and the tag releases from the animal and pops up to the ocean surface, transmitting information on the mortality event to overhead satellites.  Of 28 Bigeye thresher sharks tagged from 2016 to 2019, 25 survived the effects of capture and release, at least for the 30 day tag period which is the time determined to be most critical for the onset of adverse capture effects.  This high likelihood of catch and release survival can be attributed to the many design features of Deep Set Buoy Gear and Linked Buoy Gear that allow for the rapid release of non-target species such as thresher sharks. 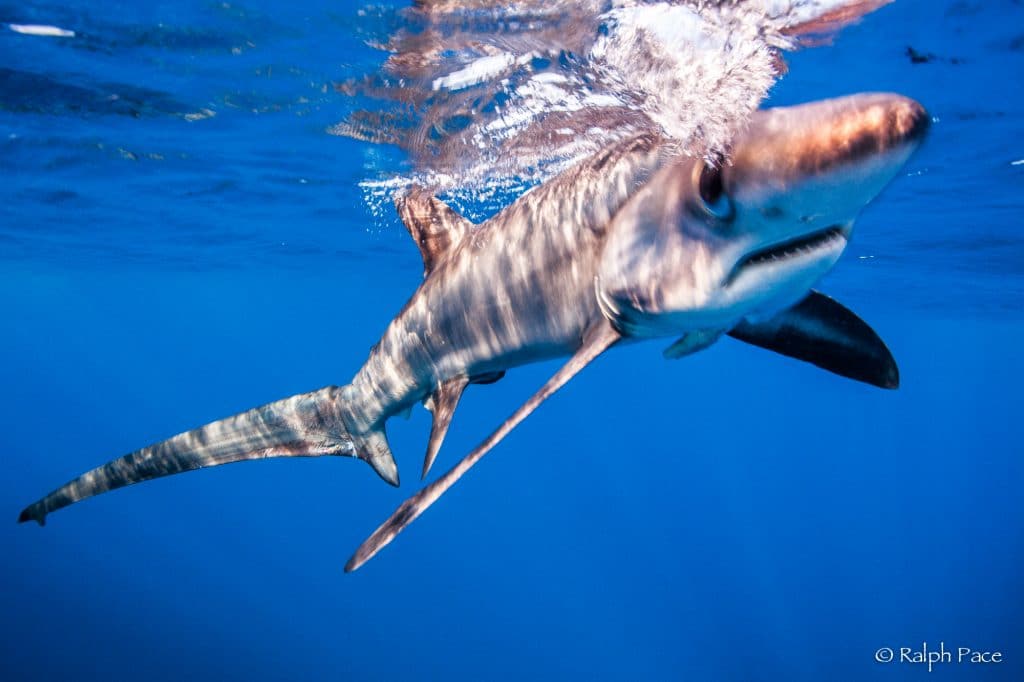 Survivorship studies are an important component in commercial gear development as it gives researchers, fishers, and managers insight into potential mitigation strategies to reduce bycatch mortality and, in cases such as deep set gear where survivorship is high, allows fishers to demand a price premium for their low-impact harvest techniques.

Past work by the PIER team has focused on documenting post release survivorship in the California recreational fishery for the common thresher shark.  This species is a popular game fish that provides anglers with a challenge during the spring and fall months.  This PIER-NOAA collaboration resulted in several outreach products including the production of a short video segment on catch and release survivorship studies by the NOAA Ocean Media Center.

Additional studies at PIER include work on the Feeding Behavior and Ecology of the common thresher as well as NSF sponsored studies that focused on thresher shark muscle physiology.

As with most studies at PIER, the thresher work has been possible through the productive collaboration with researchers from several organizations including NOAA, University of Massachusetts, Dartmouth, MiraCosta College and the University of Calgary, Canada. 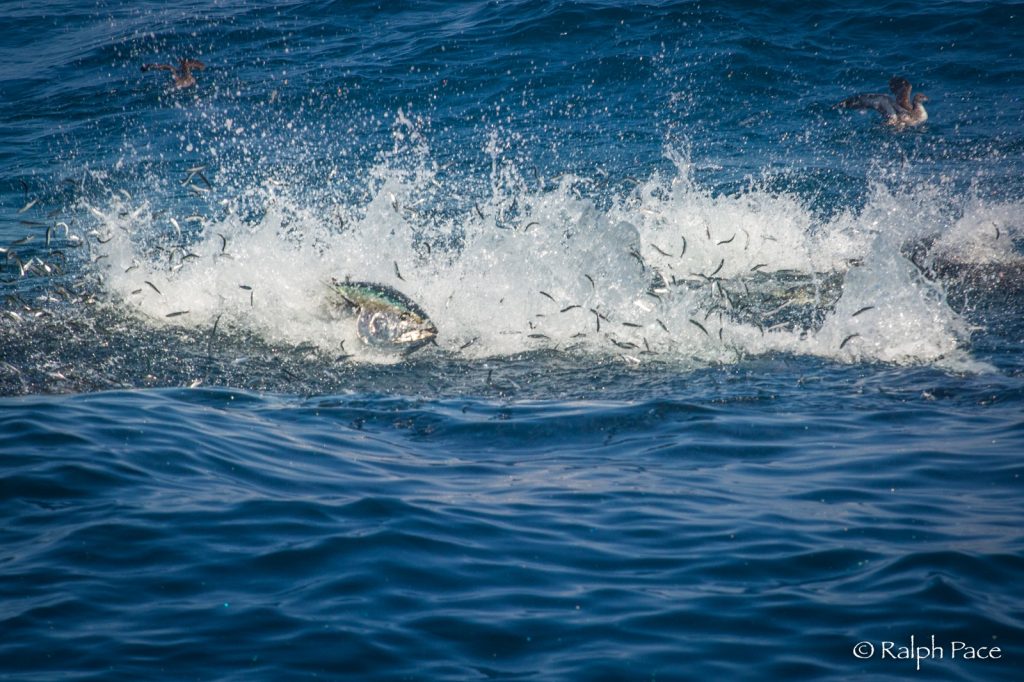 The Pacific Bluefin Tuna (PBT), Thunnus orientalis is a wide-ranging pelagic species that spawns in the western Pacific. Despite recent periods of localized juvenile bluefin abundance off southern California, updated population assessments have shown a steep decline in the number of spawning adults.  Suppressed abundance of mature PBT within distinct spawning grounds around the Philippines and Sea of Japan has prompted increased fishery restrictions across the Pacific, including California recreational bag limit reductions. 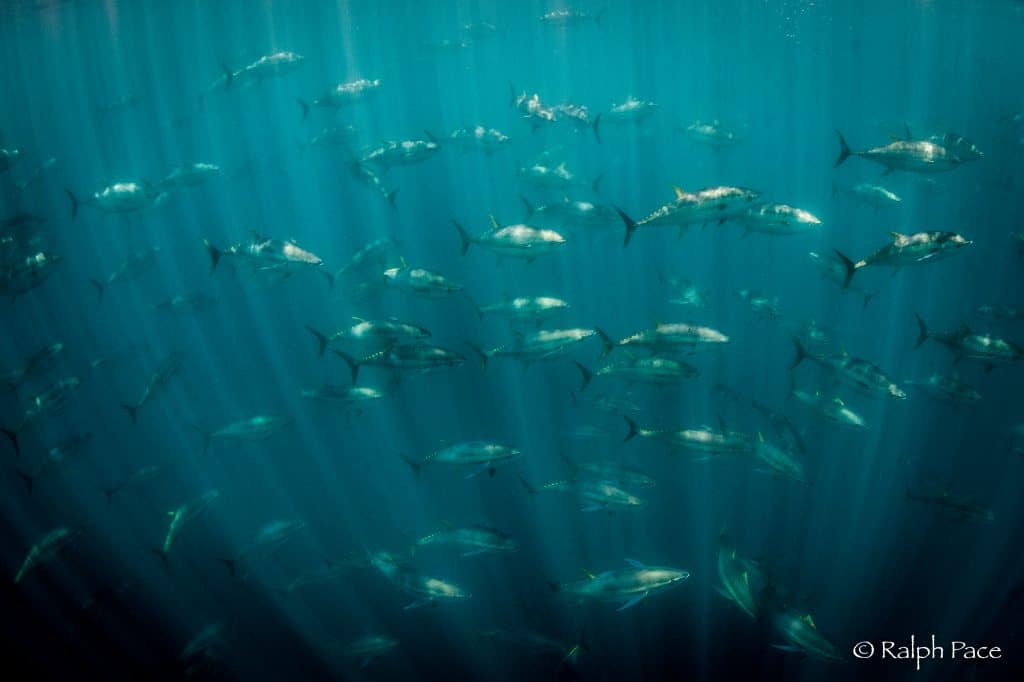 Off California, the PBT fishery is focused primarily on juveniles ranging in size from just a few pounds to over 300.  It has been proposed that all PBT are spawned in the Western Pacific and a portion of the stock migrates across the Pacific at an early age to the rich foraging grounds off the U.S. West Coast and Mexico.  Juvenile PBT may remain off Baja California and the U.S. west coast for several years before returning to the western Pacific upon reaching sexual maturity.  Throughout their extensive migration, PBT are targeted by a variety of fisheries, including directed effort by California recreational anglers.  Considering recent California recreational fishery bag limit reduction from 10 fish/day to 2 fish/day, recent tagging work by PIER researchers has focused on assessing post-release survivorship and documenting best practices for anglers that release their catch. 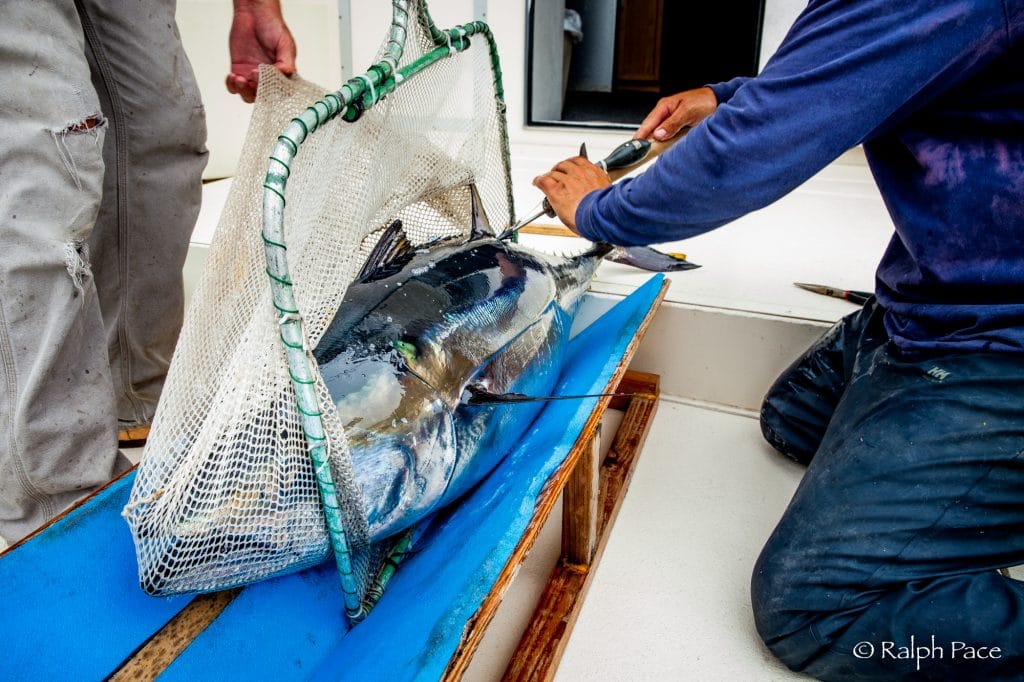 These tagging studies have shown that Pacific bluefin tuna can have high survival rates following recreational capture and release when handled properly.  Anglers can greatly increase the likelihood of survival following catch and release by practicing a few simple techniques: 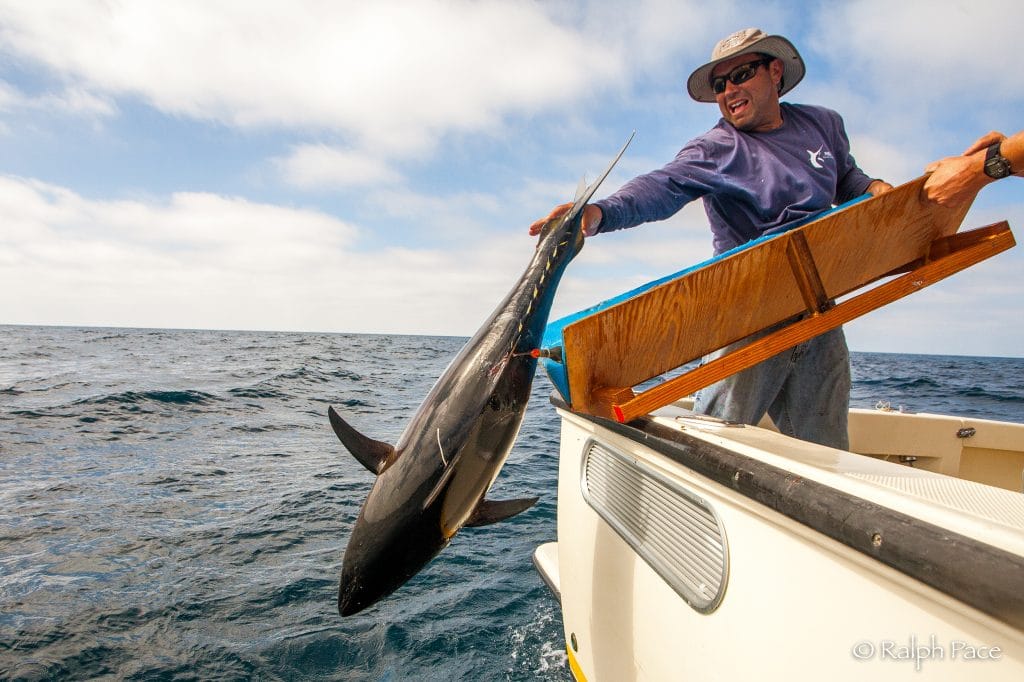 If you intend to release your catch, using appropriate gear and handling techniques will maximize fish survival and minimize recreational fishery impacts.  Supporting sustainable fishing practices and properly releasing supplemental catch will help to ensure the long-term availability of our valuable marine resources.