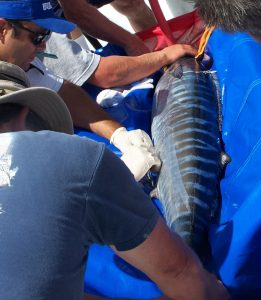 Collaborative studies with researchers from Scripps Institution of Oceanography have also focused on the respiratory physiology of the wahoo.  These studies assessed the degree to which the wahoo gills are specialized for high cardiovascular performance and compared the respiratory structures with other active species (i.e., tunas, marlins and swordfish). Read more about this work. 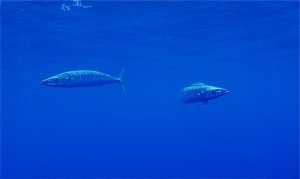 The wahoo is a pelagic, highly migratory species of the family Scombridae broadly distributed throughout tropical and subtropical oceans.  Wahoo are considered to be a relatively fast growing and somewhat short-lived pelagic predator that experiences high rates of natural mortality.  Like many other oceanic predators (i.e., tunas, billfishes), wahoo have a number of morphological and physiological adaptations related to fast burst swimming which make it a prized target among recreational fishers. Due to its large size and high food value, the wahoo is also landed in many commercial operations globally. Throughout their extensive range, wahoo support directed recreational and artisanal fisheries and are a valuable incidental catch in both tuna purse seine and longline fisheries.

Because wahoo are not typically the primary target of large-scale commercial fisheries, few studies have focused on this species, especially in the Eastern North Pacific.  Given how important the wahoo is to local sportfishing operations, such as the San Diego Long Range fleet, PIER launched a series of studies aimed at better understanding wahoo movements, biology and ecology in this region.