The PIER team has several research projects focused on better understanding the movements, spawning dynamics and stock structure of white seabass off the California and Mexican coastlines.

Management and History of the White Seabass Fishery 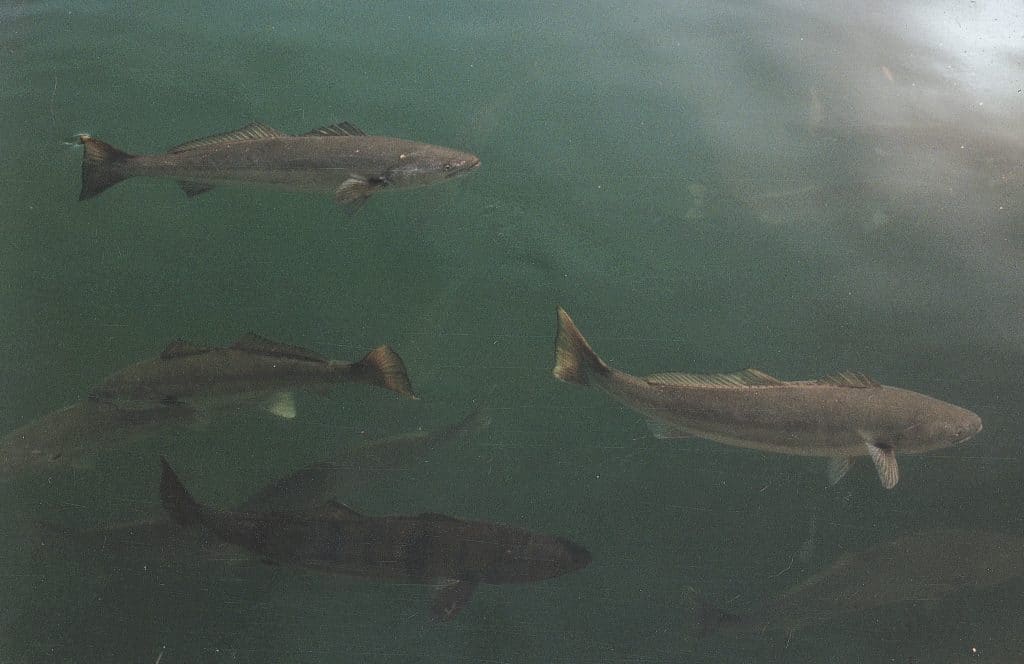 The white seabass is an economically important species that has historically been targeted by commercial and recreational fisheries throughout their functional range, from Northern California to Magdalena Bay, along with an isolated population in the Northern Sea of Cortez  (CDFG, 2002). Fishery landings reached historically low levels in the early 1980s due largely to sustained levels of over-fishing in the latter half of the century (Vojkovich and Reed, 1983). The California coastal gillnet fishery was extremely effective at harvesting white seabass, especially when fish aggregated near-shore to spawn during the spring and summer months.  The gillnet fishery is now prohibited from setting gear within state waters (<3 miles from the coast and <1 mile off of the Channel Islands) and restricted from fishing  during a portion of the spawning season, from March 15 to June 15 (in southern California).

The Marine Life Management Act (MLMA) of 1998 and the Marine Life Protection Act (MLPA) of 1999 were also significant in the management of white seabass. Under the MLPA, the California Department of Fish and Game is mandated to develop a coastal network of marine protected areas to manage marine resources at an ecological level. Marine protected areas (MPAs) are designed to preserve the critical habitat and spawning populations of marine organisms and to serve as larval sources for surrounding areas. 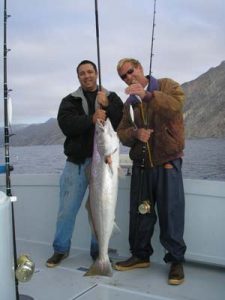 Landings have increased dramatically in recent years, indicating a rebuilding stock. This resurgence has spurred an increase in fishing effort directed at white seabass, making this species a common target of recreational anglers in the spring.  Recreational fishermen are currently limited to one fish over 28 inches per person per day between March 15 and June 15, while three white seabass can be kept per day the remainder of the year. The overall catch-and-release mortality rate of juvenile white seabass has been estimated at 10%, however; this rate is dependent upon the location of hook damage and is increased when deeply embedded hooks are removed (Aalbers et al, 2004). 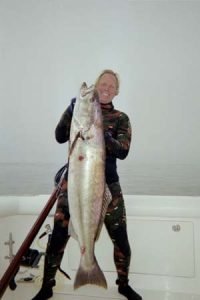 White seabass are also a prized target species for spearfishers throughout California. The acute hearing capability of white seabass compels freedivers to hunt silently on a breath hold for a chance of encountering a trophy fish. Experienced freedivers have grown accustomed to listening intently for the low-frequency sounds produced by white seabass to increase the likelihood of locating their elusive target.  Over the past five years spearfishing for white seabass has grown considerably, with the number of divers frequently outnumbering traditional fishers in the early months of the fishery.

Based on roughly equivelant rates of tag recoveries (1/3 gillnet, 1/3 commercial hook and line, 1/3 recreational) during PIER tagging studies, it is evident that all sectors of the fishery (recreational and commercial) rely heavily on this valuable commodity. Thus, all fisheries must be involved in cooperative management strategies that promote the sustainability of this shared resource.

References:
Aalbers, S. A., G. M. Stutzer, and M. A. Drawbridge. 2004. The effects of catch-and-release angling on the growth and survival of juvenile white seabass captured on offset circle and J-type hooks. North American Journal of Fisheries Management 24:793-800 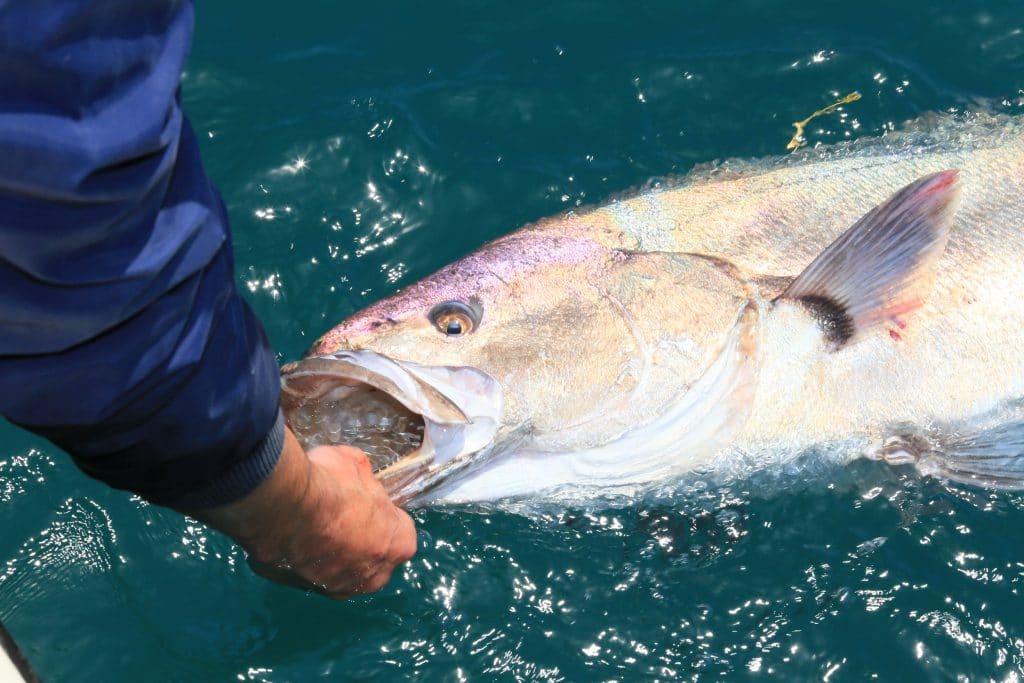 The objective of this comprehensive multi-year project is to better understand the vertical and horizontal movement patterns, catch rates, and temperature preferences of the white seabass.

This project is a multi-phase study that uses electronic data-logging tags to document depth distribution, temperature preferences and migration patterns of white seabass along the California and Baja California coastlines.  Adult white seabass are tagged and released during the spring and summer months in areas where spawning aggregations are targeted by the recreational fleet.  To date, the PIER team has deployed over 300 archival tags in white seabass ranging from 28 to 60 inches (7 to 65 lbs).

The first phase of this work revealed a relatively high recapture rate of 23%, with 39 out of the first 170 tags recaptured by fishers.

Based on the high recovery rate and wide geographic span of tag returns in phase 1, the  PIER team is currently deploying geolocating tags to further investigate questions related to white seabass inter-annual movement patterns.  Additional tag deployments are scheduled for subsequent seasons with the second phase of this tagging study.

The success of this project is dependent upon fisher involvement through the return of recaptured tags. Tagged seabass are readily identifiable with a yellow dart tag near the dorsal fin and a white stalk protruding from the underside of the fish.  The return of a recaptured tag receives a reward of $200 and a tagging project T-shirt. Reward and contact information are labeled on all tags.

This work is supported by the George T. Pfleger Foundation and the Offield Family Foundation. 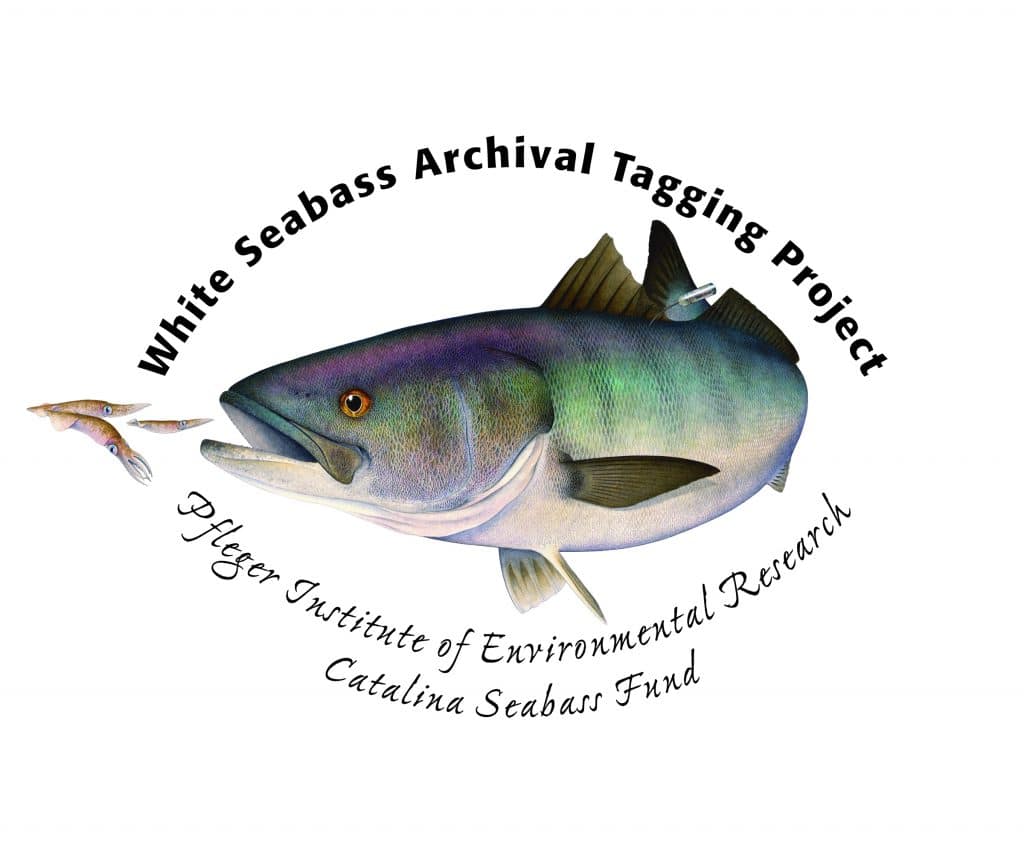 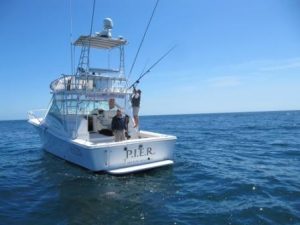 The PIER team initiated a multi-phase tagging project in 2007 that addresses several ecological and population level questions for the white seabass resource along California and Baja California, Mexico.  The tagging efforts are extensive and utilize the knowledge and support from several generous individuals, including Tom Pfleger, Paxson Offield and the Catalina Seabass Fund team (John and Johny Talsky and Chase Offield), as well as Jock and Charlie Albright.

Each tagging team consists of seasoned seabass fishers that are well equipped and  trained to perform the tagging surgery in under two minutes (watch the Catalina team tag and release a seabass).

In order to ensure survivorship it is vital that the seabass are brought to the vessel quickly and that the time out of the water is minimized as much as possible.  This often means that not every seabass that is caught is a good candidate for the tagging research.

Collectively, this project has deployed over 300 electronic tags in fish up to sixty five pounds.  To date we have had recaptures from over a 700 nautical mile stretch, spanning from San Francisco to Punta Baja, Mexico.  Recaptured fish have been taken by all of the southern California fishery demographics, ranging from spear fishers and kayakers to net fishers. 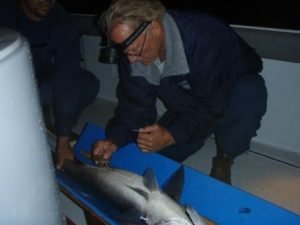 Recapture rates vary slightly from year to year, but seem to hover around 20%, a value that suggests high fishing pressure on the stock.  The findings from the first phase of this work are being prepared for publication in early 2013.

We are thankful for the support we have received from all participants and look forward to another productive tagging season. 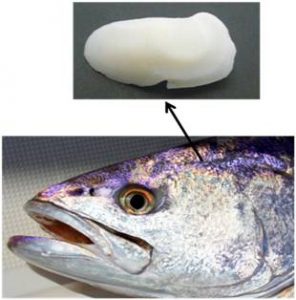 This collaborative project investigates white seabass population dynamics with colleagues from CICESE (Centro de Investigacion Cientifica y Educacion Superior de Ensenada), in Baja California, Mexico.  Collectively this work tests whether the white seabass caught along California and Baja California (Norte and Sur) represent the same stock, or whether there are distinct populations with limited mixing.  The study uses a combination of otolith microchemistry and age/growth characteristics to compare individuals from multiple sites along California and Baja California.

Because the white seabass is a trans-boundary resource that supports vast commercial and recreational fisheries in the U.S. and Mexico, determining the different nursery areas and understanding the population dynamics of this species is critical for effective management.  The California Department of Fish and Game has recently highlighted the importance of understanding white seabass movements and the degree to which we share this resource with Mexico.

This work is being conducted in the laboratory of Dr. Sharon Herzka (CICESE) with graduate student Alfonsina (Kena) Romo Curiel heading up the investigations. 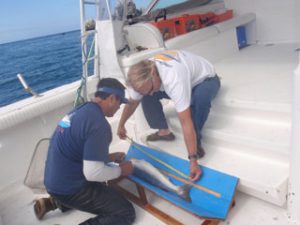 This work is supported by the George T. Pfleger Foundation, the Offield Family Foundation, and Southern California Edison. 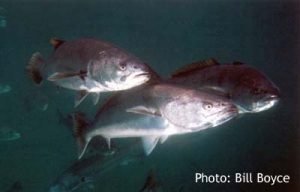 MPA sites are continuously monitored throughout the Spring and Summer spawning seasons and compared with acoustic records from sites situated within similar, non-reserve habitats.  Recorders are periodically serviced by a dive team and downloaded for subsequent analysis in the PIER laboratory.

This work is supported by the George T. Pfleger Foundation, the Offield Family Foundation and Southern California Edison. 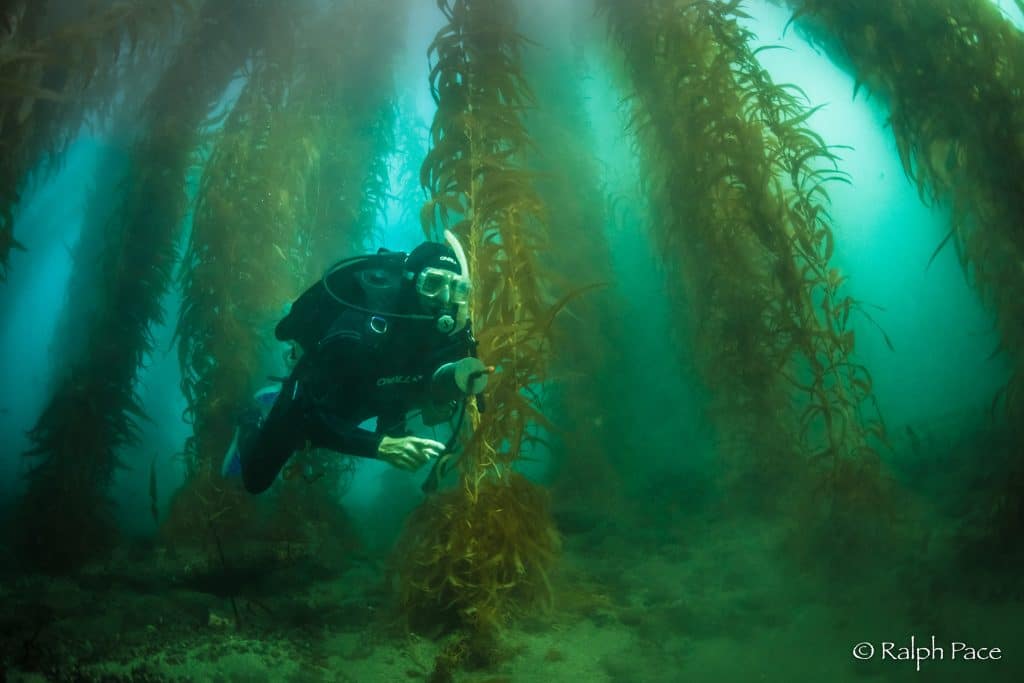 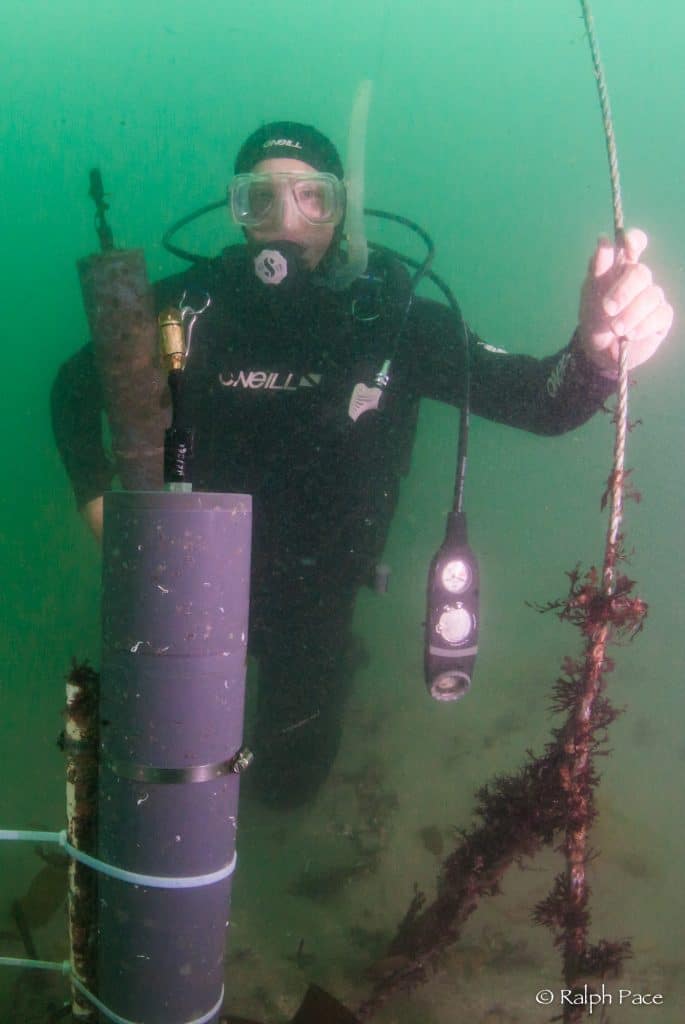