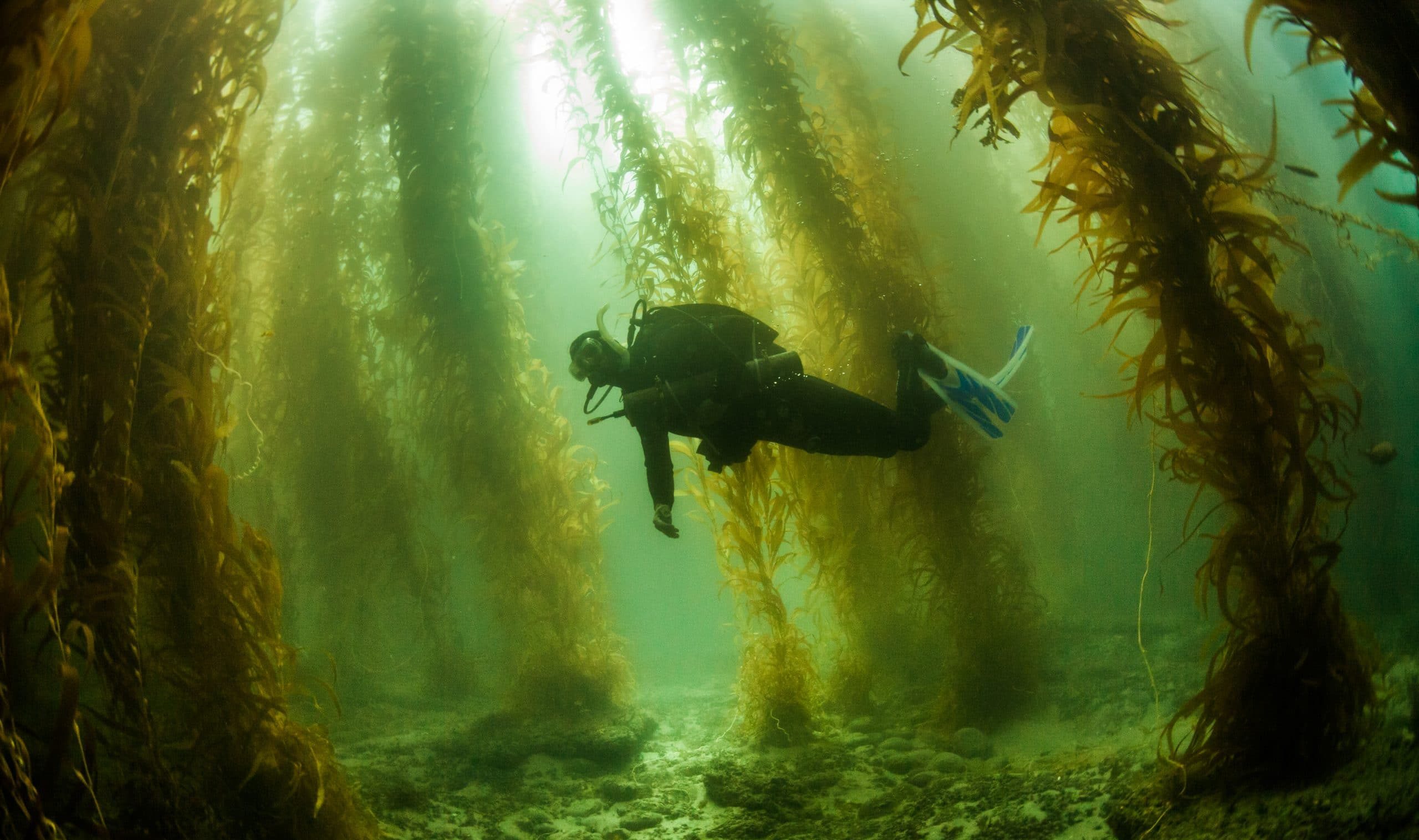 PIER’s primary research vessel is the R/V Malolo, a 46′ custom made Newton that is equipped with dual Cummins diesel engines and has a range of over 500 miles.  The Malolo is capable of housing five scientists comfortably and has several amenities that help the team perform a wide range of studies.  The Malolo has a 30-foot harpoon plank for tagging swordfish, a Furuno side-scan sonar system for acoustic sampling, hydraulic pump for gear deployment and retrieval, and live fish hold for transporting specimens.  The vessel is the primary research platform for most of the PIER studies and is berthed in Oceanside Harbor, California.

PIER also owns an 18′ Boston Whaler Outrage tender that is used extensively for coastal studies along southern California.  The whaler provides the team with a rapid transport vessel as well as an ideal dive and sampling platform.  The Whaler is critical for the maintenance of PIER’s acoustic array and used throughout the year on most of the PIER projects.

PIER researchers have used Smart Position or Temperature Transmitting (SPOT) tags to track fish in real-time. SPOT tags are secured to a fish’s dorsal fin or tail.  The tag sends a signal to a satellite each time the wet/dry sensor on the tag senses that the fish’s fin is at the surface and out of the water. The satellite can then locate the precise location of the tag (within approximately 350 meters) and send the data via e-mail to the researcher. Using this technology, one can receive daily updates on the exact locations of the tagged fish. The advantage of a SPOT tag over a pop-up satellite tag is that the animal can be tracked actively and more precisely.

Unfortunately, not all fish routinely expose their fins at the surface and long-term tag attachment can be problematic.

Pop-up satellite archival tags (PSATs) are archival tags also have the capacity to transmit the stored information to a satellite.  The tag is typically inserted into the dorsal musculature with a barb while the tag itself remains outside the animal.  PSATs typically log temperature, depth and light intensity. As with the archival tags, light can be used to calculate latitude and longitude and offer estimates of fish position. After a predetermined amount of time, the tag releases from the fish, floats to the surface and uploads its data to the ARGOS satellite system. 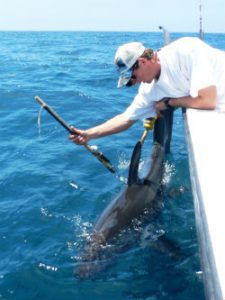 Because the satellites can only transfer so much data at a time, the data must be compressed before transmission and detailed records like those provided by the archival tags are difficult to obtain. If however, the PSAT is reacquired, the entire dataset can be downloaded and the tag can be re-fitted for subsequent deployment.  One major benefit to PSAT technology is that the fish never has to be recaptured to recover the data and we can study species for which there is no fishery or for which conventional tag returns are very low. The only disadvantage of the pop-up tags is that they are relatively expensive and data transmission is limited.

Acoustic telemetry is used to obtain a relatively continuous record of fish movements and is ideal for answering fine-scale questions. It can be done actively, in real-time, or passively, using a listening station. For both modes of telemetry the first step is to secure an acoustic transmitter or “pinger” to a fish. This pinger emits an acoustic pulse at a frequency from 32-300 kHz. This sound pulse is then picked up by a hydrophone. Where the hydrophone occurs varies between the two methods. The system best suited to a project will depend on the specific questions the researcher wishes to address.

For passive tracking the hydrophone is mounted on a secured listening station. The listening station detects any tags within its range and logs the occurrence of the tagged fish. The range is generally 100-1000 meters and depends on the frequency of the transducer and the power output of the tag. Often a number of listening stations are used around islands, in bays, or in submarine canyons. Some listening stations communicate with and download data that has been collected by the tags. Others are simple and only indicate when a specific ID number is detected.

The PIER Channel Islands Acoustic Receiver Array was one of the largest collections of acoustic listening stations during its time.  It encompassed five of the Channel Islands as well as points along the Southern California coast. 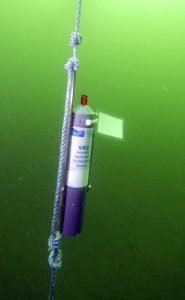 When conducting active tracking, a hydrophone is mounted to the tracking vessel and a sound pulse emitted by a sonic transmitter is used to follow the fish in real time. The intensity of the signal indicates the relative distance between the boat and the fish. The bearing to the fish is either determined by rotating a directional hydrophone around or by using multiple hydrophone elements, which do not need to be rotated to indicate direction. The vessels used for active tracking can range from a small skiff to an oceanographic research vessel. Active tracking is labor intensive and tracks typically only last on the order of hours to days. The ability to track generally depends both on the endurance of the crew as well as the sea conditions. Ideally tracks are of sufficient duration to enable the animal to recover from the tagging experience and resume its daily movement patterns. Based on previous data it has been shown that pelagic fish can recover from capture in as little as 4 hours.  This, of course, varies between species and individuals and is highly dependent upon the degree to which the fish was stressed during the tagging procedure. 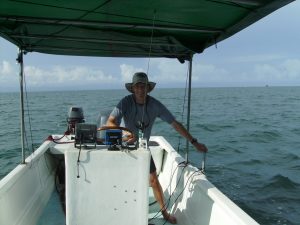 In addition to obtaining the path of the fish from the tracking vessel, transmitters may also encode data such as depth, temperature, heart rate, tail-beat frequency and compass heading. With this suite of parameters it is possible to determine not only where the fish is but also answer other interesting questions pertaining to the physiology of the animal. When coupled with additional sensors on the tracking vessel, the physical characteristics of the environment (e.g. temperature, oxygen concentrations, and prey abundance) can also be quantified and incorporated into a movement model. Active tracking is ideal for answering questions pertaining to the fine-scale movements of a fish; however the disadvantages are that the tracks tend to be short in duration and they are labor intensive. 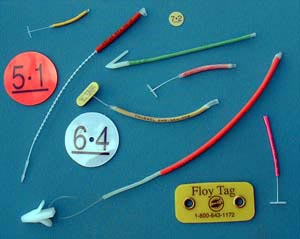 Conventional tags are essentially fish identification tags. These take many forms and may consist of a long piece of plastic tubing, a disc, or small coded wire. Generally they contain a unique number, identifying the individual fish as well as contact information from the sponsoring organization. They can be secured with a plastic or stainless steel dart or may be inserted under the skin entirely.

A tag is secured to an individual fish at time A. When a fish is recaptured at time B we have a location at two separate times and can make a rough estimate of movements and stock structure. Documenting the associated changes in size provides researchers with the growth rates of tagged fish. Recording the percentage of tagged fish that are re-caught can indicate population size. Conventional tag databases have provided a wealth of biological information for many species and have been critical for management.

However, conventional tags do have some limitations: